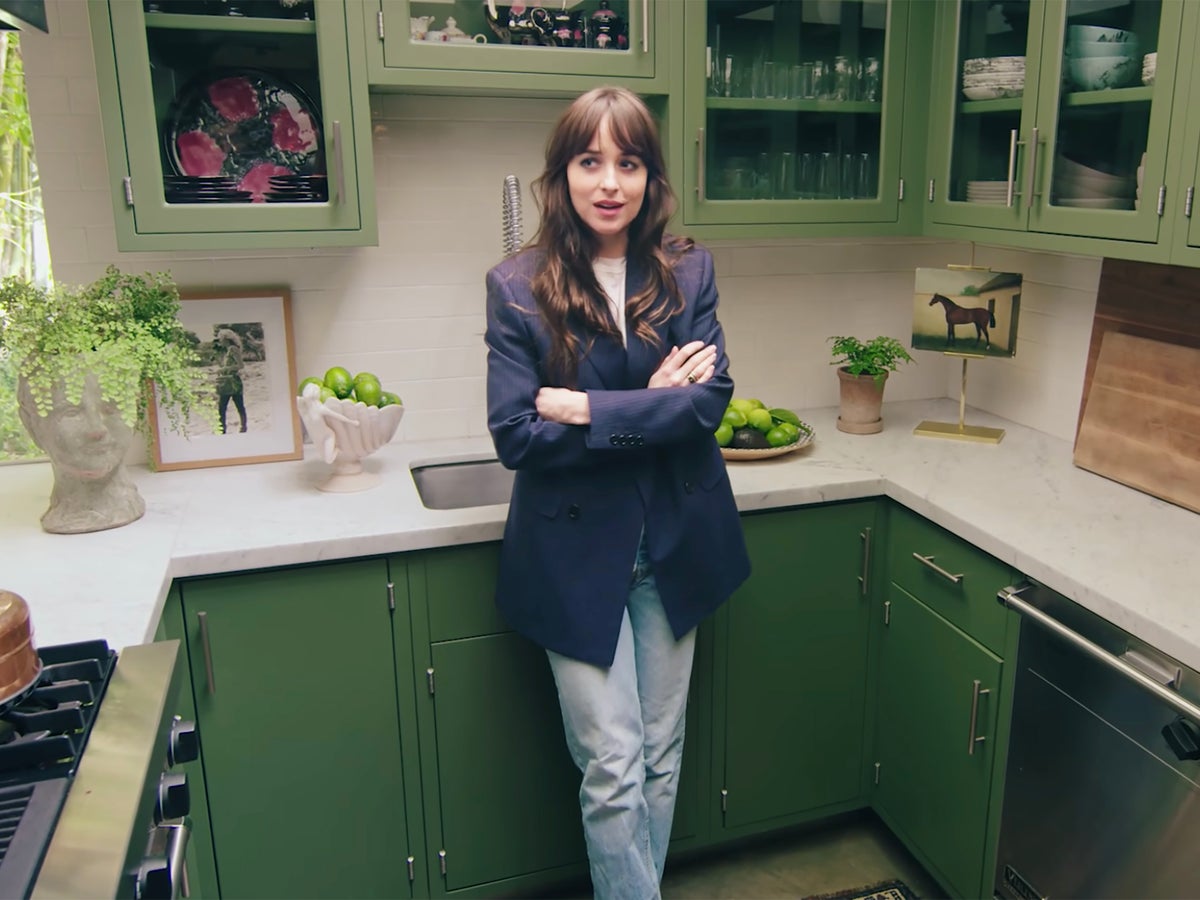 Many of my days start the same. To paraphrase You’ve Got Mail, I turn on my computer. I wait impatiently as it boots up. I go online, and my breath catches in my chest until I read three little words: Dakota Johnson’s kitchen. Unveiled in an instantly viral video for Architectural Digest in March 2020, the Suspiria star’s kitchen is the Garden of Eden without the preachiness. It’s a daydream. A mood. An olive-green utopia, presumably designed by an angel. I want to dive into it, eat it, squat in its cabinets like the world’s luckiest hobo.

By now, Johnson’s Architectural Digest video has ceased being a meme. No one is talking about her professing her love of limes any more. Nor the scandal (not really) that emerged when Johnson confessed she didn’t actually love limes: they had been put there by an AD set decorator. She reportedly no longer even lives in the house in question. Were the miserable reviews for her new Netflix movie Persuasion some kind of karmic retribution for moving out of it last year? Who can say? Regardless of the video’s age, though, it continues to draw me back. It’s had more than 23 million views since its release; I must surely be responsible for at least two thirds of them.

Located in the Hollywood Hills, Johnson’s (old) house is a shimmering bohemian hideaway. You can imagine the rock stars of Almost Famous having sex in it. Or Eve Babitz despairing of something while standing near the lap pool. There are wood panels, framed photographs, and Persian rugs. A book given to Johnson by Patti Smith. A People’s Choice award, for her work in Fifty Shades of Grey, that drips with irony. Lots and lots of photos of breasts.

The kitchen is its showpiece, though. It’s relatively small for a celebrity abode, with Architectural Digest alumna tending to plant kitchens the size of aircraft hangars in their homes, as in DJ Zedd’s ghastly mansion. Or keep them eerily sparse, like designer Michael Kors’ tribute to American Psycho’s Patrick Bateman. But Johnson’s screams taste, practicality, and understated elegance. The surface is made of shiny marble; the splashback is a cool white. The cabinets have the look of high-school lockers – but in a good way, I promise – and there are gorgeous bursts of green dotted around the place, in the leaves of plants, that aforementioned bowl of limes, and the mounted illustration of a grazing horse.

During a stop in her kitchen, Johnson boasts – with equal parts confusion and grinning pride – of her collection of china. “I never, ever thought that I’d be a dish person,” she says, “because I don’t get it at all.” But she has lots of them. And at least three colourful teapots. Mugs with rose patterns on them. Tiny plates far too small to be used by anyone who isn’t a Borrower. “I mean, can you stand it?” she says of a random mug. “Wouldn’t you want to drink out of this? I never do, because they’re too cool. They’re just for sitting in this cabinet.”

I’ve decided that what Johnson is referring to here are things that are beautifully pointless. Objects that serve no real function, but are there to be looked at, sighed over. Little nothings that make a home your own. These are different from, say, a photo of a loved one. Or even a bit of artwork on your wall. These items sometimes have stories attached, but most of the time they don’t. Unless you think “saw it, liked it, bought it” is particularly interesting.

I’ve become more and more dependent on these things. Since that video, surfaces in my flat have become busy with pointless objects. A Whoopi Goldberg bobblehead. A pot shaped like a Halloween pumpkin. Ceramic pigs and dishes. A cookie jar – never used – shaped like Father Christmas. A red Solo cup sent as part of a promotional package for the movie Ma. So many snow globes. At an antiques fair, I am Bruce in Matilda, slathering myself not in chocolate cake but in vintage tat.

There are probably numerous social reasons for this compulsion: an attempt to combat a renter’s market that convinces you that you’ll never actually own anything; a recent history of being forcibly housebound; a rejection of that unbearable millennial hustle culture that insists everything must be “useful” somehow. I can go on. But I like to think it’s mainly to do with Dakota Johnson. When she dubbed herself a “dish person”, I didn’t necessarily see myself: I saw the person I could be.

That may be the intended purpose of these Architectural Digest videos, but it’s tricky to pull interior decoration ideas from, say, Dominic West’s wife’s castle. Or the private spa that Gwyneth Paltrow had installed in her house, which looks like a really, really luxe public toilet. Instead, the sheer joy with which Johnson speaks of her home – and the eclectic stuff she has in it – point towards something fundamental about how we should try to exist. The message is clear: if you surround yourself with nice things – regardless of function or price – everything else becomes so much more bearable.