Kourtney Kardashian has had enough! The reality star called out the person who made fake social media accounts pretending to be her son Mason Disick. Taking to her Instagram Stories and Twitter on Thursday, July 21, Kourt set the record straight after she unsuccessfully hoped it was obvious that the phony posts were not coming from the 12-year-old boy she shares with her ex Scott Disick. 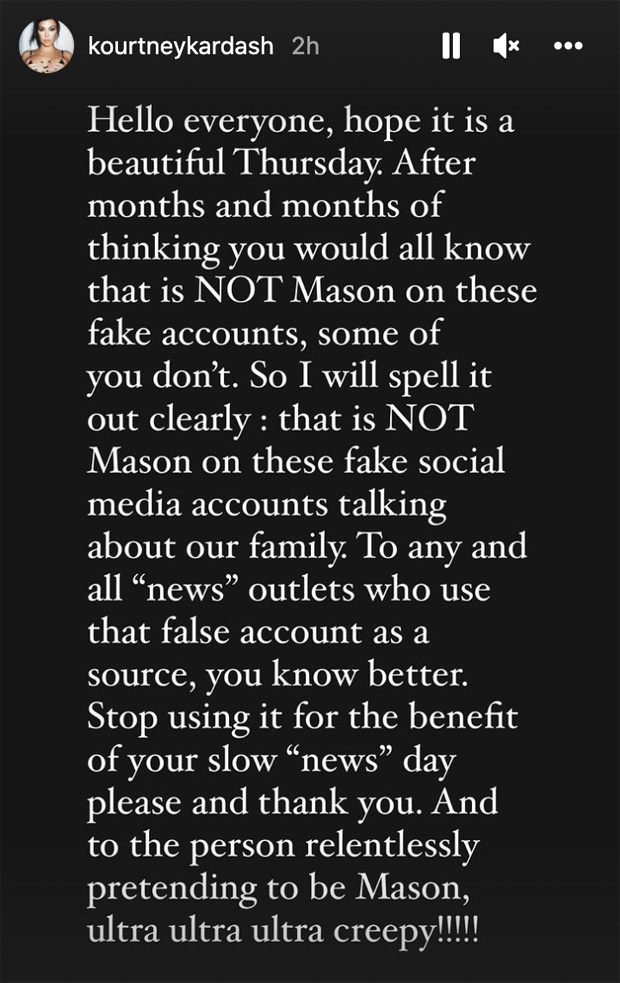 Kourt then went on to ask news outlets to stop using the fake accounts as a source. Before she signed off, the Good American founder added, “And to the person relentlessly pretending to be Mason, ultra ultra ultra creepy.” Ouch!

The backlash from the reality star comes a day after a social media account claiming to be authored by Mason shared a series of posts alleging Kourtney’s younger sister, Kylie Jenner, was planning on walking down the aisle with her baby daddy Travis Scott. The phony account also suggested Kylie was the main attraction at a bridal party. It’s obvious why Kourtney wanted to quickly shut down any notion that her offspring was involved with such gossip.

However, Mason did have his own Instagram account back in 2020, but that was also quickly canceled by protective mama bear Kourt. “He started an Instagram yesterday and didn’t ask us,” Kourt explained in March 2020. “I did delete it because Scott and I just felt like… He’s 10! I think, on Instagram, the thing that really worries me is the comments. People can be so mean.”

As kids do, Mason hilariously found a way to get back on social media at the time by starting up a TikTok Q&A. One fan asked what happened to his original TikTok account, and he explained that it “got deleted because [he] was ‘too young.’”