Phil Charter’s character tells of the four generations of his ancestors that sustained the family restaurant in the heart of Jaipur. 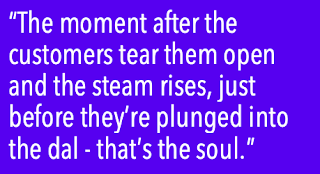 When they were younger, the boys drank tea before school and boasted how they would captain the cricket team or star in action movies. Now they dream of escape. I am happy to watch from the kitchen, hoping they see more than calories, grams and rupees on each plate. Above the kitchen door is a sign – hivado. The centre, the heart. I can’t play cricket or sweep a girl off her feet and drive away on a motorbike. My heart has a hole in it, a literal hole, an atrial septal defect. I can’t even carry a twenty kilo sack of basmati.

The defect in my twin sister’s heart killed her before she was born, so after four generations of strong-willed women, the family business and all the people it feeds passes to me. My heart may be faulty, but through these recipes, I’ll share it with you.

She made the dish while Manikya worked in the factory. Ladies from the neighbourhood brought pots and ingredients and sprinklings of advice. My great great grandparents shared the oven on the lot behind the two-room house. Her recipe is complex and chaotic like her scrawled writing on the sheet in our restaurant. Chana, toor, mung and twenty-three other ingredients comprise the mind, body and soul of the dish. Pratiksha’s community pot was dark and deep – heavy on cumin and light on turmeric. By the time my grandmother was born, the pot and their house stood in a growing neighbourhood, and when I arrived in the late 90s, an entire city had sprung up around it.

Using the riveted kadai is painful, but the pan adds the notes of hundreds of repetitions. It interacts with the dal like they’re an old married couple. The smell from that pot brought fame to the kitchen of Pratiksha. It gave body to the people of the Bani Park district. That dish fed children needing an extra meal, workmen, the elderly.

The ‘mind’ is the churma, a roti crumb, infused with toasted nuts and clarified butter. Even when times were hard, she ground cashews to add richness to the dish. On the day of Pratiksha’s death, the family sprinkled churma onto the back field. One pinch each. While she is still able, my mother keeps the tradition alive.

The salt in the buttermilk roll gives the baati just enough rise. They prove for hours, and we fry them in ghee, so it’s dense in the middle and light on the outside. The moment after the customers tear them open and the steam rises, just before they’re plunged into the dal – that’s the soul. When I watch their faces, I see the same boys who dreamed of world cups and Bollywood.

Those who could, gave contributions, which went toward righting the wrongs of Maikya’s factory bosses. Through the years, the money trickled in, and by the end of their lives, they owned the plot with the oven behind their house. It would become our restaurant.

Despite sharing her name with the goddess of conjugal bliss, Parvati’s marriage was not a happy one. Nani-saa grew up without a father. All she knew of him were the sour words her mother left hanging in the air.

Parvati’s cooking was severe – dry spice, tough roti and precise portion sizes. With new businesses jostling for position around Bani Park, the restaurant required a firm hand. But once a year, the rains came. According to Nani-saa, her mother softened with the monsoon. Women in colourful saris, their hands adorned with mehandi, take centre stage in the city. The reds and yellows of Sinjara transform the streets and shopfronts. For those few days, she closed the cafe and joined the Teej procession, which passes close to the house. Now you need tickets to stand shoulder to shoulder with thousands. Last year we missed the parade. I took my mother to her hospital appointment and had such low blood pressure, I had to see the doctor, too.

After the rains, something magical is left in the air. Ghevar is made of this magic, with creamy rabri sitting on a cloud of happy honeycomb bubbles. Couples share them, holding their hands underneath to catch the crumbs that fall through the hole in the middle.

Parvati’s recipe balances sweet and sharp, with a hint of cardamom peeking through. It was the one time of year she didn’t scrimp on ingredients. She topped the fried biscuits with thick white rabri, red saffron stalks, and green pistachios.

One year, Parvati rented a cart and sold ghevar in front of the house. By the next festival, procession crowds passed by to visit her stall – Parvati Teej Ghevar. It’s been a permanent fixture in the festival ever since the 1950s, creating thousands of memories. I think of her when I hold my hand underneath to catch the falling crumbs.

Doctors say the defect in my heart is only the size of a lentil, but it can’t be sealed in a jar and forgotten about. It must be observed and measured and managed. In the winter, I don’t get light-headed. These months, I feel stronger. In winter, the restaurant makes kadhi.

Back when Nani-saa ran our restaurant, one hundred and fifty people a day came through the doors. She hired local chhoros and worked in the kitchen from sunrise until sleep. In the cafe, bus conductors and market traders came for breakfast. The men talked loud, happy for everyone to know their opinions and secrets. Middle-class wives visited for lunch, unthinkable in Parvati’s time. The restaurant did not charm the customers with smiles or rock-bottom prices, but they returned to the place where they felt at home. Between cooking in the restaurant, and caring for my mother, I rarely leave. Rahendra Family Kitchen is more than my home, more than hivado.

In the seventies Japiur was booming, and people demanded a voice. Her restaurant was a democracy. Nani-saa showed the same respect to every customer. She served rice, stuffed paratha, plain roti, coriander and a tadka on the side. Hundreds of tiny wooden bowls, metal dishes and plates pulsed through the restaurant.

In fact, there is no great secret to Nani-saa’s recipe. Garlic and fresh green chilli go into the yoghurt, along with gram flour, turmeric for colour, and a good pinch of salt. The key is aerating the mix. The first time I helped, I attacked the bowl, trying to whip it into a frenzy by spinning the wooden stick as fast as possible.

‘You can’t command the air into it, boy. Not all at once,’ she said, laughing. Then she showed me how to roll the stick between my hands at a consistent speed. ‘Like blowing on a fire to keep it burning.’

I rolled that stick for hours each day. It was the start of my training. When I got tired, she set up a chair in the pantry. We were the beating rhythm of the operation, in the same kitchen where it had all started with Pratiksha.

Nani-saa’s husband, Ajeet, became lame after a road accident. That made two of us, three if you count my mother. He couldn’t keep his job at a textile factory, but he used his contacts in the city to fulfil tiffin orders. Business grew from just a few orders to forty or fifty a day.

On weekdays, Ajeet would bark orders at hired teenagers on their mopeds as they sped off into the Pink City to deliver the tins. They sneered at me, the kitchen slave, too weak to stand for nine hours a day, but I would never trade the heat of the stoves and the sounds of the kitchen for those chaotic streets.

As a child, they were just a bite between meals. When I made them, I understood they are a social currency. We eat them at celebrations, funerals, at school, on the street, and in our living rooms. The dough, heavy and crispy, with the sweetness of caramelised onion inside, makes any moment better.

My mother was diagnosed with multiple sclerosis when I was just eight, and with no daughters, she passed the family’s recipes to me as if they would become my children. I’m applying to your television show for her, not to launch my career as a Michelin-starred chef, but to share the history of these recipes with the nation. I have cooked for these last ten years, served an apprenticeship snatched in moments between mathematics homework, hospital appointments and pining for non-existent girlfriends.

I first made kachori aged twelve, frying the onion with spices, and filling the dough rounds my mother cut. As I played pat-a-cake with the balls, I imagined them laughing as they jumped from one hand to each other – little babies bathing in oil then patted dry with a cloth. I was the proud father when teachers and classmates wolfed down the batch. Of course, insults flew in the playground. I was a sissy and a kitchen boy, destined to scrape a living serving Jaipur’s ‘real men’.

Since then, I have learned to share my life with customers. Through these years of repetition, I have learned to recognise the closed eyes of bliss, just as I recognise the kachori babies smiling as they look up at their creator. I would not change my culinary training. I would not transplant my cardiovascular faults to anyone else. The sights and sounds of the market are my escape. Bills paid in full are my best friends. The neighbourhood is my family, and every time a customer returns I am proud to share my heart with them.