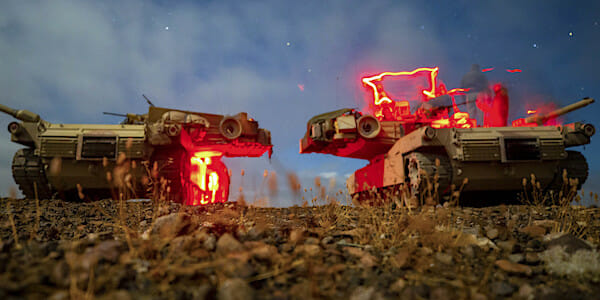 Putin has spent more than a decade building up the Russian military and positioning it to be, at the very least, a military Sword of Damocles over the heads of Europe. His recent proposals for an agreement with the West are nothing short of an attempt at armed extortion. If the U.S. and its NATO allies are to deter Moscow’s threats of aggression, they must do more to strengthen their military posture. Washington should make it a priority to ensure that Poland, a NATO ally, has all the U.S.-made military equipment and training it has requested.

Russia has been preparing for this confrontation for years. It has added to its Navy and has a massive program underway to modernize all three legs of its Strategic Nuclear Triad and its theater nuclear forces. This year, it began the current campaign to intimidate Ukraine by threatening aggression. As part of its regular Zapad (“West”) exercise last year, Moscow deployed some 80,000 troops along its border with Ukraine. Among these were most of the best-equipped land and air units in the Russian Armed Forces.

Most of those forces and virtually all their equipment, including command, control, and communication (C3) resources that would support an invasion of Ukraine, remained near the border. Also of note is that the Russian military conducted the ZAPAD exercises with the Belarus military in the spring and likewise left most of the C3 infrastructure in place.

Since last summer, the Russian General Staff has bolstered its forces facing Ukraine and NATO, when it announced the addition of major equipment and forces to substantial capabilities already deployed in the Kaliningrad oblast, including nuclear-capable Iskandar missiles that can target most of Western Europe from Kaliningrad and 20 new combined arms battalions. In addition, the majority of elite airborne units and Special Forces are now within striking range of Ukraine. These are precisely the type of units needed for a rapid ground offensive.

At the same time, as it was increasing military pressure on Ukraine, the Russian government also undertook a series of moves designed to demonstrate its ability to engage in high-intensity warfare against the West. Advanced long-range anti-ship missiles, air defense, and electronic warfare systems were deployed to Crimea to dominate the Black Sea. Moscow has tested both its intercontinental hypersonic missile, the Avangard, and a ship-based theater range weapon, the Zircon.

The point of these demonstrations and exercises is to intimidate the U.S. and NATO, thereby undermining support for Kyiv. This is reflected in the two proposed “agreements” the Putin regime has presented to NATO. If implemented, they not only would sell the former Soviet republics to permanent Russian servitude but would mean the demise of NATO.

The Russian proposal would break the decades-long pact between the NATO nations on nuclear sharing. Article 7 of the proposed agreement is even more blatant in its design to undermine the Alliance’s credibility as a defense pact, calling for “the participants, who are Member States of the North Atlantic Treaty Organization, shall refrain from conducting any military activities on the territory of Ukraine, as well as of the other States of Eastern Europe, Transcaucasia and Central Asia.”

The current negotiations over the crisis are President Putin’s Munich Moment. The consensus among experts on Russian political and military affairs is that the immediate goal of the military maneuvers is to encourage the West to grant Moscow de facto dominion over Ukraine. Putin’s maximalist demands, such as calling for the removal of NATO military hardware and forces from the Alliance’s Eastern frontier, are not serious. His objective is not just to prevent Ukraine from joining NATO but to ensure it is a failed state that Moscow can dominate, if not eventually reincorporate. He may even seek to coerce Kyiv into recognizing the independence of separatist territories.

Since 2014, when Putin orchestrated the illegal annexation of Crimea and supported Russian-backed separatists to destabilize eastern Ukraine, NATO has been building up its defensive capabilities. Defense budgets are up in many NATO countries, although only a handful have met two percent of GDP, the alliance-wide commitment.

Due to its geographic position on NATO’s Eastern flank, its staunch anti-Russian posture, and its commitment to acquire Western (primarily U.S.) military equipment, Poland is the key to any credible defense of Europe. Bordering the Baltic States, Belarus, Ukraine, Romania, and the Russian enclave of Kaliningrad, Poland occupies a central position in any NATO-led defense against Russian conventional aggression in Europe.

Poland has been one of the most stalwart NATO allies to build a credible military deterrent. Its defense budget routinely exceeds the required two percent of GDP. More importantly, it has made a point of acquiring high-end U.S. military equipment and has undertaken a long-term, multi-billion-dollar program to modernize its military. Warsaw has acquired the Patriot air and missile defense systems and the HIMARS long-range rocket artillery platform. Poland is yet another European country to agree to acquire the fifth-generation F-35.

Poland needs to finish its modernization program to pose the kind of deterrent that would dissuade Russia from military adventurism. Poland’s army still operates some 500 obsolete Russian-designed tanks that are more than thirty years old. With the support of the U.S. Army, Warsaw has formally requested the purchase of a sufficient number of M1 Abrams main battle tanks to replace these obsolescent platforms.

Adding the M1 to its inventory would send a powerful message to Moscow, underscoring President Biden’s warning to Putin of the certainty of a reaction to any attack on Ukraine. It would also underscore that Moscow’s efforts to negotiate NATO out of existence are a non-starter.

But DoD needs to act now on Poland’s request to acquire the M1 Abrams tank. The sale must be moved forward expeditiously. Congress should insist that the Biden administration act now.

Dan Gouré, Ph.D., is a vice president at the public-policy research think tank Lexington Institute. Gouré has a background in the public sector and U.S. federal government, most recently serving as a member of the 2001 Department of Defense Transition Team. You can follow him on Twitter at @dgoure and the Lexington Institute @LexNextDC. Read his full bio here.