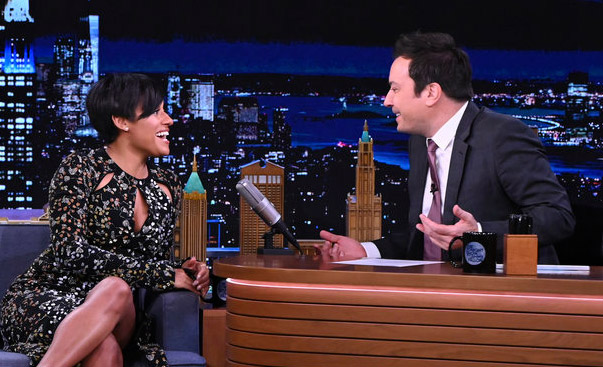 Ariana DeBose is talking about her audition for West Side Story and why she had to say “no” to director Steven Spielberg at one point.

The 30-year-old Golden Globe-winning actress opened up during an interview on The Tonight Show Starring Jimmy Fallon on Thursday (January 13) in New York City.

Ariana was on the show to promote her hosting gig on SNL this weekend.

Click inside to find out what she said about the audition…

During the interview, Ariana talked about auditioning for the West Side Story movie while she was a cast member in Summer: The Donna Summer Musical on Broadway.

“I was really tired one evening after the show, and Cindy Tolan, the casting director, called and goes, ‘Hey, can you come to Brooklyn tomorrow at 10AM?’ I was like, ‘But it’s 11:30PM right now. Can I just dance and sing?’ She said, ‘Sure, sure, sure. I got you.’ So I get there the next day, and there’s Steven Spielberg and Tony Kushner,” Ariana said.

Ariana explained how the singing and dancing portions of the audition went well, but then Spielberg asked her to read lines from the script as well.

“I said, ‘No,’” she recalled. “I said to myself the night before, ‘These scenes—these are Tony Kushner-expanded scenes. They can be wordy. They’re important. You gotta nail it.’ Quite frankly, I’m not in the business of going in a room as a Black woman and not getting it right. You’ve got to come in prepared.”

“A few weeks later, [Spielberg] called me in a nail salon. I had foils on my nails. He asked me if I would be his Anita. Crazy!” she added.