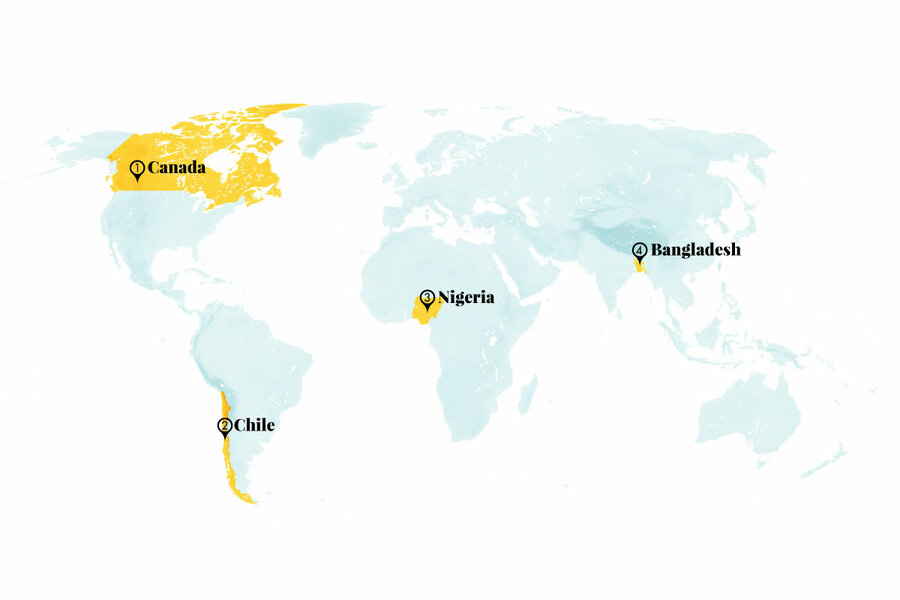 Along with everyday road safety and emergency preparedness, we look at improved quality of life for LGBTQ people in Chile and formerly incarcerated Nigerians.

Wildlife crossings in Canada’s Banff National Park are inspiring transportation authorities to build animal-friendly roadways elsewhere. In the early 1980s, the Trans-Canada Highway running through the country’s oldest national park averaged about 100 elk-vehicle collisions annually. The once-infamous roadway now boasts the highest density of animal crossings in the world, with at least 38 underpasses and six overpasses, and has served as a proving ground for the conservation strategy. “There was just a lot of skepticism from biologists,” said Tony Clevenger, a senior wildlife research scientist at the Western Transportation Institute at Montana State University in the United States, who was asked to monitor these structures by the Canadian government. “But our data showed the wildlife crossing measures were highly effective.”

Why We Wrote This

Both special construction projects and better planning have saved lives. In Canada, a busy highway features pathways that protect animals and people alike. And in Bangladesh, cyclone preparation includes layers of warnings and the personnel to staff the effort.

His team proved not only that these bridges and tunnels reduced deer collisions by 86%, but also that the structures allowed otherwise isolated bear populations to breed. The Banff project has informed animal crossing projects in other countries, including the U.S. and Costa Rica.
Mongabay

Drivers pass under a wildlife corridor in Banff National Park in Alberta in July 2019. These structures allow wildlife to traverse the park and avoid contact with vehicles.

Chile has legalized same-sex marriage, making it the eighth Latin American country to embrace marriage equality. Both congressional houses voted by an overwhelming majority to approve the measure, which was quickly signed into law by President Sebastián Piñera, a center-right leader whose term ends in March and who once opposed the legislation. He changed his position this past summer, stating, “The time has come to guarantee that freedom and that dignity to all people.”

Same-sex couples have been able to form civil unions in Chile since 2015, but now they can enjoy equal spousal benefits and adoption rights as married couples. The bill, which was first introduced in 2017, reflects a shift in opinion on LGBTQ issues. Most Chileans now support same-sex marriage.
NPR, Al Jazeera

Rafael Teran (left) and his boyfriend, Cristian Garcia, take a selfie in front of the La Moneda presidential palace after lawmakers approved legislation legalizing marriage and adoption by same-sex couples, in Santiago, Chile.

An organization in Nigeria is working to lower recidivism with job training and support. In Nigeria the rate at which formerly incarcerated people return to prison jumped from 35% in 2007 to 50% in 2019. Dream Again, which began as a small effort to bring libraries to correctional centers throughout the country, prepares those behind bars for reentry into society. With five staff members and eight volunteers, the group works with prison authorities to coordinate its “Rethink, Reform, and Re-enter” program. Phase one focuses on mentally and emotionally supporting incarcerated people, phase two is about job skills training, and phase three involves material support for newly released participants.

To date, Dream Again has worked with 2,000 individuals in six prisons across Nigeria. One participant, Emmanuel Kusa, says the group helped him start his own soap-making business after he struggled to find work outside prison. “I am so happy bearing in mind my one-year stay in prison was not in vain,” said Mr. Kusa. “I see it as going there to learn.”
Prime Progress

Bangladesh has dramatically reduced its cyclone-related deaths, and could serve as a model for other nations facing extreme weather events. Since 1970, when Cyclone Bhola killed 300,000 to 600,000 people, Bangladesh has lowered storm fatalities by a hundredfold while the frequency of destructive cyclones has increased. Today, the South Asian country has improved meteorological capacities and developed a more sophisticated early warning system.

Nowadays, local mitigation committees disseminate information about incoming storms through text, radio, and mosque broadcasts, and by knocking on doors. Bangladesh has also increased the number of cyclone shelters from 44 to more than 14,000, with the newer buildings housing up to 2,500 people. Another boon to the country’s preparedness is the national cyclone volunteer corps, which achieved gender parity in 2020. Women now make up half of the 76,000 volunteers – an important development considering women are often in charge of caring for families but don’t typically have the same access to information as men. Experts say the shift has made shelters safer for women and reduced the disproportionately high number of female casualties during storms.
The New Humanitarian, Bulletin of the World Health Organization

Get stories that
empower and uplift daily.

Renewable energy had another record-breaking year of growth in 2021, according to a report from the International Energy Agency. Countries around the world installed an additional 290 gigawatts of renewable power capacity over the past year, beating the previous record for renewable growth set in 2020. Despite the ongoing pandemic and rise in cost of raw materials, new climate policies drove an uptick in renewable development.

On the current trajectory, by 2026, the capacity for generating renewable energy will exceed that of nuclear and fossil fuel energy combined, but experts say it’s still not enough to meet the net-zero carbon emissions target by midcentury. “We need to move up another gear now,” said Heymi Bahar, lead author of the report. “It is possible, we have the tools. Governments need to show more ambition, not just on targets but on policy measures and plans.”
The Guardian, International Energy Agency