The Evening I Discovered a Lump in My Breast 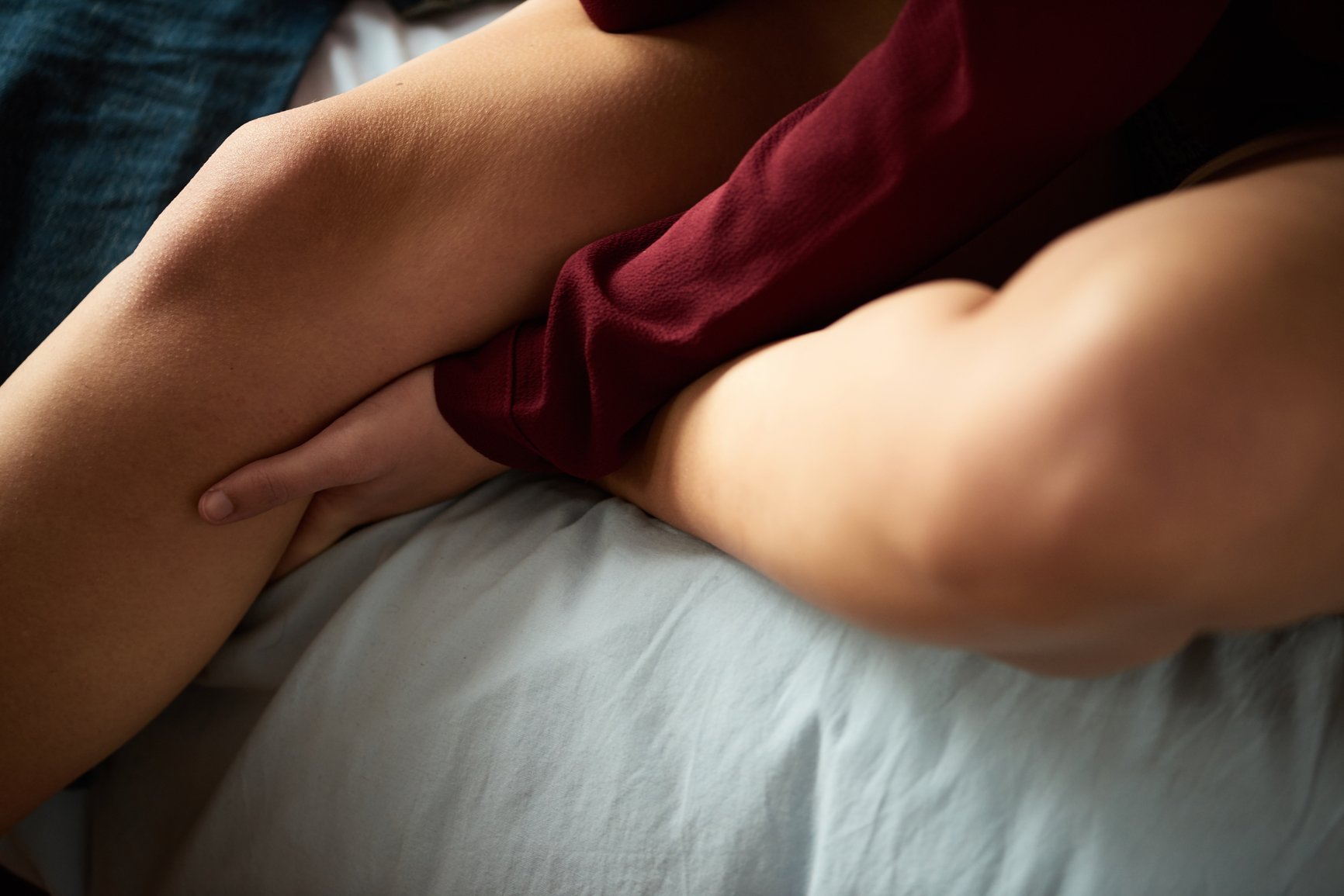 How do you know your dog is dead?

My mother was concerned and texting me about her elderly dog. I asked if he was breathing and no, Wilbur was not breathing. He had collapsed soon after peeing. I told my mother to put a towel over him and I would be there as soon as possible. It was already a busy day. My novel was coming out in two months and I needed to respond to emails before picking up the kids from a local park. But trouble worships at the altar of inconvenience.

Later that night, after transporting the corpse to the vet, I found the lump in my breast.

I am now being treated for breast cancer. According to my oncologist, one in eight women gets this disease. More women get breast cancer than floss regularly. This makes my diagnosis somewhat run-of-the-mill, which is both reassuring and frightening. As I write this, I am sitting up in bed leaning against something called a wedge pillow. I am between surgeries and chemotherapy, considering a buzz cut and reading about the likelihood of mouth sores. I want to write, but as it turns out, cancer is time consuming. It’s infuriating. It won’t let me make stuff up.

Like parenting, cancer is something you do while you do all the other things. A friend, upon learning of my diagnosis, promised to knit me a boob softie and would I mind merino wool if they were out of cashmere.

The day after I dropped off the dog corpse, I scheduled a mammogram and ultrasound. As the Russian woman with the blue mascara and N95 mask maneuvered my breast into a plastic tray while explaining that, due to my age (47), half of my breasts had migrated to my armpits, I stared at the daffodil mural and wondered why women needed to be reminded of flowers while they’re standing topless in front of a big white machine. One week later, I was back for a biopsy and, this time, a field of bright orange poppies. As I perched on the table awaiting the technician, I jotted down some notes for a story about a Russian woman with blue mascara.

Soon after, on my way to pick up my daughter from physical therapy, I got the call. “It’s not the news we were hoping for,” is how the nurse began. As I pulled the car over, she declared matter-of-factly, “You will get through this. But we should act quickly.” There were other words: fast-growing tumor, surgery, chemotherapy. I interrupted her. “I need to find parking. Can you email me what you just said?” She said she would. I found a spot around the corner.

In the car, I told my 13-year-old the news. “I’ll be okay,” I said, crying, “But I have breast cancer.” She was quiet and stared out the window. Back at home, she made me a cup of mint tea and suggested we watch Gilmore Girls. It was the episode where Paris gets bossy about the school newspaper. We stared at the screen and waited for the rest of the family to come home. My husband had taken the older one to the DMV to test for her learner’s permit. When they walked into the kitchen, permit in hand, I restated something I would later say one hundred more times to my extended family. “I’ll be okay. But I have breast cancer.” As I described what I understood about my disease so far, my older daughter cried, and my husband nodded slowly. We ordered Thai food and read the pathology report. After dinner, I excused myself to listen to a sample of my audio book.

“The good news is that you can keep the top skin and nipples,” the plastic surgeon informed me, after drawing a diagram of my breast showing the location of the tumor. He depicted my breast as a perfectly round circle with the nipple as a tiny donut, smack dab in the middle. I told the surgical team my first novel was coming out in a few weeks. “How exciting,” one of the residents said. “We can schedule around that.”

I spoke to a stranger who, eight years ago, had had a double mastectomy and reconstruction with the same surgical team. She told me to buy this wedge pillow, and to request an anti-nausea drug to get me through general anesthesia. She encouraged me to take the pain medication, and to wear a button-down blouse to the hospital because I wouldn’t be able to pull shirts over my head for several weeks. She assured me I was doing the right thing, and what my new breasts would lack in sensation, they would make up for in symmetry and perkiness. She sent me a photo of her cleavage and offered to meet me somewhere so I could see and touch her silicon breasts. “It’s just what we do for each other,” she said, when I marveled at her invitation. Then I put on lipstick and attended a virtual event for debut novelists.

Between blood tests, Zoom book events, and doctors drawing on my breasts with Sharpies, it began to hit me. Rocking back and forth on the floor of my bedroom, I fantasized about running away. I could fly to an island, swim in warm water, and order drinks from someone who thinks I’m healthy.

On a Friday in March, I woke up at dawn and showered with antiseptic body wash. After removing my jewelry, I pulled on sweatpants and my mother’s button-down shirt. My husband drove me to the hospital and held my hand in the waiting room. When the woman with the hoop earrings asked if he was my next of kin in the event I couldn’t make health decisions for myself, I started crying. My surgeon visited and asked if I was writing another book. “I think so,” I told her. “I’ve been busy.”

The nurse with the mole on his forehead had to put the IV in my foot. The veins on my hands are “tricky,” he said. I surrendered to him my merino wool knit boob, and he promised everyone would take good care of me. Then he put a mask over my mouth and told me to take several deep breaths.

Six hours later, I woke up woozy with a large bandage across my chest. I felt an incredible weight which made normal breathing difficult. Below the bandage, under my skin and pectoral muscles, were two expanders that would hold the place for future implants. Drains to collect excess fluid hung down from my body like extra intestines. My husband kissed the top of my head. His lips were soft. “You did it,” he said, looking proud and relieved. We ordered chicken teriyaki from the hospital menu, and I sipped apple juice through a straw. That night I requested that the nurses leave the shades open so I could watch the lights flicker in the skyscraper next door. I half-watched Crazy Rich Asians and a corset movie with Keira Knightley while I drifted in and out of sleep. I first saw Crazy Rich Asians on a plane two years ago. I had cancer then but didn’t know it.

Back at home in bed, propped up against the wedge pillow, I checked my email. Many people had enjoyed my novel. One reviewer called it “strange and beautiful,” and another said, “This book will haunt me for a while; maybe forever and not in a bad way.” I smiled and swallowed more pills. I could barely move. Sharp pains shot through my chest like lightning bolts. My left armpit felt like it was on fire. I had no appetite for anything other than ice water. And more frightening than the physical pain, was the psychosis. I was scared to be alone. I was worried I might rip the drains out of my sides and pick open the incisions to tear the expanders out of my chest. I didn’t want to hurt myself, but I wanted, no — I needed — the foreign objects out of my body. The next day I picked up a prescription for an anti-anxiety med.

A few days later, I went to a bookstore for a signing. I wore a black hoodie with inside pockets to hold the drains. It was designed for women who had had their breasts removed. It also came in pink but that seemed too upbeat. I sat in a folding chair and signed 30 copies of my novel. A customer asked me what it was about. “Secret-keeping,” I replied.

My oncologist’s assistant called today, interrupting a short story I was working on. Next week I will start chemo. This will involve 16 infusions over the course of five months. The story is about a policeman who is concerned about his aging body. I can’t decide how to end it. The strongest of the drugs, Adriamycin, is bright red and can cause burning sensations in the body, which is why it is referred to as The Red Devil. You can’t make that up.

Rebecca Handler is a writer in San Francisco. Rebecca’s stories have been published and awarded in several anthologies, and she blogs regularly at One Woman Party. Edie Richter Is Not Alone, her debut novel, was published in March 2021, received a Kirkus Starred Review, and was longlisted for the Center for Fiction First Novel Prize. Rebecca was recently awarded a MacDowell fellowship and looks forward to spending April 2022 in the woods in New Hampshire, writing her second novel.

P.S. “Nine life lessons I learned after my cancer diagnosis,” and what does it mean to think about cancer as a battle?

10 Wholesome Cookbooks for the Greatest Meals This Summer time